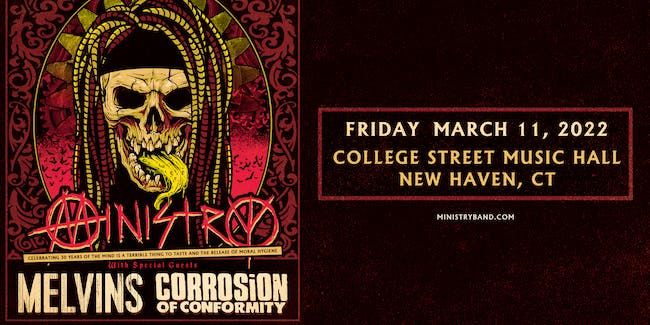 By purchasing tickets to this event, you agree to abide by the State of CT, City of New Haven, Artist, and College Street Music Hall’s Health and Safety measures in effect at the time of the event, which may include, but not be limited to, providing proof of COVID-19 vaccination status for patrons ages five (5) and older and/or providing proof of negative COVID-19 test within 72 hours of event time.

After enduring a year like 2020, no one could have possibly expected Al Jourgensen to stay silent on the maelstrom of the past 12 months. As the mastermind behind pioneering industrial outfit Ministry, Jourgensen has spent the last four decades using music as a megaphone to rally listeners to the fight for equal rights, restoring American liberties, exposing exploitation and putting crooked politicians in their rightful place—set to a background of aggressive riffs, searing vocals and manipulated sounds to drive it home.

As Jourgensen watched the chaos that befell the world during the height of a global pandemic and the tensions rising from one of the most important elections in American history, he seized on the opportunity to write, spending quarantine holed up in his self- built home studio—Scheisse Dog Studio— along with engineer Michael Rozon and girlfriend Liz Walton to create Ministry’s latest masterpiece, Moral Hygiene (out October 1 on Nuclear Blast Records). Anchored by last year’s leadoff track “Alert Level”—which asks listeners to internalize the question “How concerned are you?”—the 10 songs on this upcoming 15th studio album cover the breadth of the current dilemmas facing humanity, while ruminating on the sizable impact of COVID-19, the inevitable effects of climate change, consequences of misinformed conspiracies and the stakes in

the fight for racial equality. And most importantly doing so with the lens of what we as a society are going to do about it all.

“The one good thing about taking a year off from any social activity is that you really get to sit back and get an overview of things as opposed to being caught up in the moment,” says Jourgensen, “and what became inevitably clear is that the times are changing and this past year has been a wake up call—and that’s a very good thing. Because society as we have known it the past few decades has needed to change,” he continues. “Ever since Reagan and the girth of Wall Street, we have become too close to the belief that greed is good. Society has really taken a dark turn and now we are bearing the fruit of that that misdirection driven by the idea that it’s all about me and not other people and to take care of yourself and fuck everything else. We now more than ever need moral hygiene. It’s what we have to return to in order to function as the human species on this planet.”

Moral Hygiene comes on the heels of Ministry’s acclaimed 2018 album AmeriKKKant (hailed by Loudwire as Jourgensen’s own “state of the union” address) that was written as a reaction to Donald J. Trump being elected president—though Jourgensen says this new album is more informational and reflective in tone. “With AmeriKKKant I was in shock that Trump won. I didn’t know what to do, but I knew I had to do something. Because I believe if you are a musician or an artist you should be expressing what’s going on around you through your art. It’s going to happen whether you do it consciously or unconsciously. Moral Hygiene however has progressed even further into a cautionary tale of what will happen if we don’t act. There’s less rage, but there’s more reflection and I bring in some guests to help cement that narrative.”

In addition to recruiting long-time cohort Jello Biafra (Jourgensen’s partner in the side project Lard) for the quirky earworm “Sabotage Is Sex,” other guest appearances include guitarist Billy Morrison (Billy Idol/Royal Machines) on a rendition of The Stooges hit “Search & Destroy.”

“I remember watching the coverage of his death and the next day seeing this entire letter from him come out and thinking not only is John Lewis a Civil Rights icon but he was so astute to think of how that legacy could fit into the progress of the future,”

says Jourgensen. “That letter was so heartfelt and his words were so much aligned with my own ideals I just immediately knew I wanted to dedicate a song to him. That track really is the moral backbone of this album.”

Another standout track is “Believe Me,” featuring a throwback vocal style from Jourgensen that harkens back to his singing on Twitch and cult classic “(Every Day Is) Halloween.” The song came out of a jam session with Morrison, Cesar Soto and sampling from Liz Walton, and reminded Jourgensen of his formative days at Chicago Trax Studios where communal ideas were constantly informing early Ministry records. “’Believe Me’ had such an old school vibe I wanted to bring back old school vocals.

…It’s funny how things come back to you,” says Jourgensen, also reflecting on Ministry turning 40 in 2021.

Though there have been other side projects over the years including Revolting Cocks and Surgical Meth Machine, Ministry remains Jourgensen’s lifetime passion project, and was first established in Chicago in 1981 through a relationship with legendary Wax Trax! Records. In its earliest days, Ministry was identifiable by a synth-pop style in line with the new sounds and technology that were being developed in the ‘80s, no moreso than on the infamous LP With Sympathy released by Arista Records in 1983. Yet as time progressed, so did Ministry, quickly developing a harsher and more stylized sound that found the band and Jourgensen heralded as the godfathers of industrial music amidst the release of seminal albums Twitch (1986), The Land of Rape and Honey (1988), and The Mind Is A Terrible Thing To Taste (1989) that became cultural cornerstones. With Psalm 69: The Way to Succeed and The Way to Suck Eggs (1992), Ministry hit an all time high in the mainstream and received its first of six lifetime Grammy nominations.

Eight more albums would follow before an indefinite break in 2013, only to be unearthed again in 2018 with AmeriKKKant.

With the release of Moral Hygiene, Jourgensen is more positive than before. “This may sound crazy but I’m more hopeful about 2021 than I have been in two decades at least,” he says. “Because I do see things changing; people are starting to see through all the bullshit and want to get back to actual decorum in society. We could just treat each other nicely and be treated nicely in return. I never thought Ministry would be in the position of preaching traditional values, but this is the rebellion now.”

The Melvins were formed in Montessano, Washington in 1983 by Buzz Osborne, Matt Lukin and Mike Dillard. Lukin and Dillard left the band and drummer Dale Crover stepped in shortly thereafter. Osborne and Crover have been the Melvins' mainstays throughout their 29 year metamorphosis.

To date the band has released 27 original albums, numerous live full-lengths and far too many to count singles and rarities. They've partnered with Jello Biafra, Lustmord and Fantomas for individual releases and toured the world many times over (side note: the band was in both Christchurch and Tokyo for their 2011 earthquakes).

With the release of (A) Senile Animal in 2006, the Melvins became a four-piece, essentially annexing Jared Warren and Coady Willis of Big Business. The Melvins, already known for their shattering mix of punk-meets-metal (and often referred to by an assortment of tags including sludge and grunge), were now louder and more bombastic than ever leading to a resurgence in the band's popularity and a run of three original full-lengths. Never ones for complacency, Buzz and Dale have since created Melvins Lite, a line-up partnering the pair with Mr. Bungle’s Trevor Dunn and most recently teamed with Butthole Surfers’ JD Pinkus and Paul Leary for the 2014 release, Hold It In.

Corrosion of Conformity are reuniting with guitarist/vocalist Pepper Keenan for UK/European and North American dates. Other than a few surprise appearances, this will be the first time Keenan has toured with the band since 2006. This will also be the first time the "Deliverance" lineup of the group has played together since 2001.

C.O.C. recently emerged from hibernation as a trio and released 2012's eponymous album and 2014's "IX" to wide acclaim, but many have been eagerly awaiting the return of Pepper Keenan.

The band were originally an influential hardcore punk/heavy metal crossover act before reaching critical success with a new lineup on 1991's "Blind" album. That trajectory continued with wider appeal as Keenan took over as primary vocalist on "Deliverance" (1994) and "Wiseblood" (1996).

These two recordings in particular fused the raw energy of the previous albums with some great strides forward in classic rock inspired songwriting and more spacious production and execution, which were often copied but rarely equalled.

This juggernaut gained mass and momentum with relentless touring alongside Metallica, Clutch, Eyehategod and many more.

Eventually following "In the Arms of God", 2005, Keenan focused all energy on his hometown band Down.

Until now, that is.

Recent internet chatter on the subject of a reunion turns out be true.