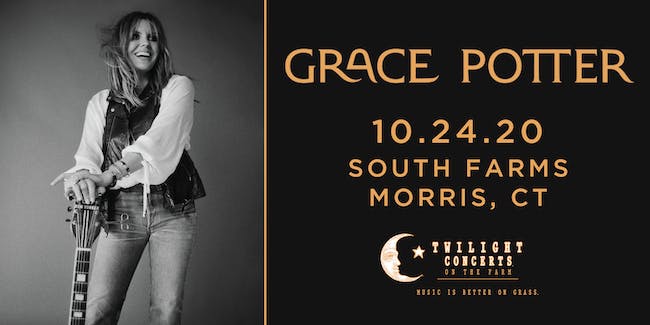 Twilight Concerts On The Farm

In the years that followed the release of her widely acclaimed 2015 album Midnight, Grace Potter considered never putting out a record again. Having endured the tumult of the breakup of her band and subsequent divorce— as well as far more joyful events like a new marriage and the birth of her first child— Potter continued writing on her own, but had no intention of sharing those songs with the world. “Too many things had happened, and I needed to take a step back,” says the Vermont-born artist. “There were moments where I thought, ‘Maybe I’ll just go back to painting houses.’”

But by the end of 2017, Potter began to feel the call of the studio and soon started laying down tracks in the Topanga Canyon home she’d recently settled into with her husband, Midnight producer Eric Valentine. Unsigned and entirely free of any pressure to appease, Potter slowly carved out the songs that now make up Daylight: an album that emerges as her most emotionally revealing, musically daring, and exactingly realized body of work to date.

In the past, I’ve aimed to write songs from a universal perspective; so that anyone who heard my music could relate, but that actually made it harder for me to take ownership of my own perspective. This new collection of songs were all written so that I could process – and be accountable for – my own life experience,” Potter says. “I had just pulled the ripcord on my whole life. It was an incredibly jarring, private experience. When the dust settled a bit, the last thing I wanted to do was tell the whole world about it. It was a very gradual process of re-framing music and its purpose in my life. So when I finally started writing songs again - I did it for me.”