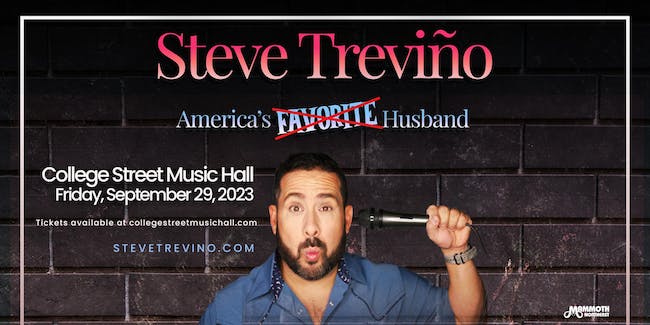 He’s fluent in wife, loves beer and barbecue, and is “America’s Favorite Husband.”

Comedian Steve Treviño shares hilarious observations on fatherhood, husband-hood, and modern life-hood at large. He locks into an undeniable rhythm fueled by straight-shooting honesty and a whole lot of heart. He appeals to audiences on the most relatable level by fitting right into their families. Among many skills, he can “speak wife” fluently. (If you’re married, you know this language!) He takes pride in his ability to assemble his own swing sets, slides, and backyard playground projects—neglecting to “call the guys” Amazon offers at $500 a pop. (If you have kids, you know this is a terrible idea!) He takes pride in the fact he’s “not allowed to make [his] own decisions,” as any good husband should. He loves his wife, Renae, so much that she wrecked his dream Silverado, and he’s sort of okay with it. This identifiable approach affirms his status as one of the country’s fastest- rising comics, viewed over 175 million times, selling out shows coast-to-coast, amassing over 1.1 million social media followers, and headlining specials for Amazon, NETFLIX, Showtime, and more.

“My comedy is very personal to me,” he says. “My goal is to make sure that everyday married men can laugh at themselves. Life wasn’t horrible for me. I didn’t have this crazy struggle. I’m just an average married man madly in love with my above average wife—and I want to make her happy. I think that translates to the audience. My narrative is I’m a normal dude trying to be a good spouse and father, just like you.”

The story starts in a town not so different from yours either.

Steve grew up in the “very Friday Night Lights city” of Gregory Portland, Texas. Surrounded by the working class industry, he describes his Vietnam Veteran dad as “one of the toughest men I’ve ever met.” During one fateful party, Steve snuck downstairs and witnessed his dad and the crew “laughing their heads off” to Richard Pryor on HBO.

“I was like, ‘How did this comedian get everybody to come inside and laugh together at the same

things?’” he recalls. “That’s when I discovered standup comedy.”

After wearing out his cousin’s Eddie Murphy VHS tapes, a 7-year-old Steve commandeered the picnic table during parties and told jokes to uproarious laughs from onlookers. He smiles, “My dad would be like, ‘Say all of that stuff you say,’ and my uncles, who are men that don’t laugh, would crack up. I found power in it. It was all I ever wanted to do.”

With no comedy clubs in Gregory Portland, he picked up and moved to Dallas at 19 years old. He lived a stone’s throw from the Addison Improv, where he waited tables, tended bar, worked the door, and gofer-ed for performing comedians, in addition to cutting his teeth on stage. He witnessed early gigs by Dave Chapelle, Jeff Dunham, Damon Wayans, and more, igniting the passion further. In 2001, he opened the iconic Three Amigos Comedy Tour featuring Carlos Mencia, Pablo Francisco, and Freddy Soto. By 2006, he began headlining shows of his own. He delivered side-splitting performances on The Late Late Show, Comics Unleashed, and BET Comic View in addition to writing for Mind of Mencia and producing and writing for international GRAMMY® Award-winning superstar Pitbull’s La Esquina.

His first Showtime special, Grandpa Joe’s Son, staked out a spot in the Nielsen Top 20. He funded, produced, and shot his 2014 runaway hit Relatable on NETFLIX. To promote the special, he uploaded a teaser clip entitled “When Your Wife Comes Home From Shopping.” It exploded as a viral sensation, generating 56 million views on Facebook alone and paving the way for a series of heavily-shared clips such as “When You Ask Your Wife If She Wants McDonald’s” [21 million views] and “When Going to Vegas With Your Wife Goes Wrong” [4 million views]. Meanwhile, 2018’s ‘Til Death maintained his momentum. Co-produced by comedy powerhouse Nacelle, Steve took over a barn in his home state of Texas under the watchful eye of Día De Muertos paintings of his family. With the cameras rolling, he delivered one of his funniest and fieriest routines.

“It’s very balanced,” he explains. “I get my digs in; Renae gets her digs in. Here are the joys of life. Here are the joys of marriage. Here’s us almost getting divorced. Here’s us having a kid. It plays like a movie, which I love. We’re very proud of our heritage. In ‘Til Death, you’ve got the Alamo, Mariachi, and the country. The stories I tell are Mexican-American—but I’m celebrating the culture for everyone.”

The material evolves as fast as his reactions do. In 2020, during a pandemic, Steve was able to give audiences laughs. Even in the midst of one of the most trying years in recent memory, he served up the My Life In Quarantine special during September 2020—available on Amazon Prime Video. Even as he upheld the staunchest adherence to COVID-19 safety guidelines in front of a socially distanced crowd in masks, Steve hilariously came to terms with the fact he’s personally “nonessential.” Of course, he takes on “shutdowns,” panic shopping, and being homebound. The year concluded on the most positive note as Steve and Renae welcomed their daughter into the world.

He also gives back whenever possible. Steve regularly raises money for Helicopters for Heroes, an organization benefitting veterans. Towards the end of each show, he spotlights vets, police officers, first responders, nurses, and teachers, and tributes them.

Additionally, he continues to organically expand the Treviño brand. He and Renae unveiled a joint weekly podcast entitled Steve Treviño & Captain Evil: The Podcast, in 2020, that started as a way to occupy time during the pandemic. Right out of the gate, it generated over 1 million views and set the stage for Season 2, which kicked off in 2021. Steve produced his fifth special at one of his shows in Waco, Texas, entitled I Speak Wife, which will be released this year.

“It’s been a very gradual hustle,” he goes on. “I just know how to be a good standup comedian.”

Nobody is better at being “America’s Favorite Husband,” though.

“If you watch my standup and walk away a little closer to your partner, I’m doing my job,” he says. “Hopefully, you think, ‘I’m not the only one going through this.’ That’s what comedy does. I want to leave you with a very honest image of what my wife and I are. I look at the psychology of a joke before I look at the funny of it. For as much as it should be funny, it should be therapeutic. That’s what I’m here for.”