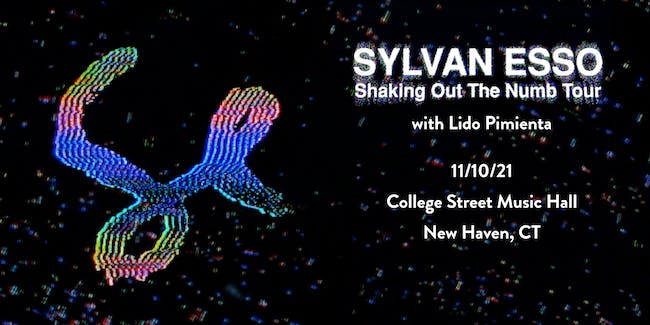 At its core, Sylvan Esso is built on conversation. The back-and-forth between Amelia Meath and Nick Sanborn. The conference between the band and the greater creative community they've cultivated, and then the exchange between that community of musicians, filmmakers, and photographers, and an ever-growing constellation of fans. All of it requires the ability to listen, deeply and reverently, to the other party. On Sylvan Esso's sold-out fall 2019 WITH tour -- which saw the band playing historic stages including two nights Los Angeles' Walt Disney Hall and the Beacon Theater in NYC, as well as Nashville's Ryman Auditorium -- and the subsequent concert film, Meath and Sanborn are inviting more people into the conversation than ever before, creating a movement unto itself.

The seeds for WITH were planted back in 2017 with the five-track Echo Mountain Sessions EP, recorded in Asheville, with an expanded live band. And much like Sylvan Esso as a project grew from a chance meeting between Sanborn and Meath, WITH came together when the stars aligned and a rare, coveted slice of open time in the fall of 2019 allowed the idea to finally come to fruition. The resulting live document, recorded at the hometown show at the Durham Performing Arts Center, captures lightning in a bottle. It's a rare artifact of a special, singular event, and the songwriting partnership that has grown to contain multitudes.

"It felt like one of those things where you have that rare moment of knowing you're in the 'good ol' days' when they're happening," Sanborn says of the experience. "It was knowing, 'This is probably going to only happen this one time, this one way,' and being aware of how special it is as it's occurring. That's such a gift."

WITH is electrified with the palpable hum of new friendship, of the band's rare bond that came from a whirlwind week of all-day rehearsals at Sylvan Esso's studio space out in Chapel Hill, North Carolina. For WITH, Meath and Sanborn assembled a dream team of some of their favorite musicians to help build out the songs. Alexandra Sauser-Monnig (Daughter of Swords) and Molly Sarlé, the other 2/3 of Mountain Man, added their vocals. Meg Duffy (Hand Habits) joined on guitar -- the rare kind of guitarist, Sanborn and Meath agree, who can make them really care about a guitar solo. Percussion came via Matt McCaughan's steadfast drumming (Bon Iver, Hiss Golden Messenger), and flourishes from Joe Westerlund (Mandolin Orange, Califone). Wye Oak's Jenn Wasner held down keys and bass, while Dev Gupta of Mr. Twin Sister and Adam Schatz of Landlady both orchestrated knotty tangles of electronics, the latter adding saxophone atop it. Everyone left their fingerprints on the band, but the show remained intrinsically Sylvan Esso.

On WITH, the joy of performing with a community, and the giddiness of blowing up expectations and experimenting with set list is evident. Here, picks from the 2014 self-titled are made new, along with selections from 2017's What Now. And for a band that typically produces raucous, high-energy crowds, the gravity and enormity of the revered theatre spaces allowed WITH to have quiet moments, like "Slackjaw," a live rarity. The emotionally stirring, stark performance of "Sound," a track written about the experience of being moved, consumed, immersed, and freed by music, is a highlight. Sarlé, Sauser-Monnig, and Meath sing together -- a familiar scene from their Mountain Man performances -- and Meath describes the trio singing as "the thing we do best, catching each other in the air all the time." It's sort of the thesis for WITH: an encapsulation of a beautiful friendship and the importance of connection, of real listening.

WITH has simply become a part of the canon of Sylvan Esso, a marker in the project's evolution. Through WITH, the audience experiences all periods of the band, but reimagined through the lens of a duo now at the height of its powers. And bound by the same ethos: inviting the audience to be emotionally vulnerable in a giant group of people. As Sanborn explains: "Everything that we do [as Sylvan Esso], we try to make sure to include people and to give someone the doorway to make it theirs." On WITH, Sylvan Esso offers the largest entryway yet.

Afro/Indigenous/Colombian/Canadian/punk/folklorist/traditionalist/transgressive/diva/angel. There are so many layers to Canadian-Colombian singer Lido Pimienta’s identity that you might get lost in them. But if you did, you’d be missing the point.

Her multi-textural, mind-bending voice and music project what Canada’s The Globe and Mail called her “bold, brash, polarizing” persona, which constantly confronts the powers that be. But it also reveals an embrace of the Afro- and Indigenous traditions that is at once defiant, delicate and sweetly nostalgic.

Pimienta’s new album Miss Colombia takes her ecstatic hybridity to a new level, building on the “nu” intersection of electronica and cumbia established by her first two albums, Color, released in 2010, and the 2016 Polaris Prize-winning La Papessa as Canadian album of the year. The latter was the first 100% independently released, non- English or French album to win the $50,000 prize. Produced with Matt Smith, a/k/a Prince Nifty, Miss Colombia overflows with the kind of understated genius that promises yet another breakthrough.

As a Canadian global-beats trailblazer, Lido has an affinity for acts like A Tribe Called Red and Inuk throat singer Tanya Tagaq, but her work also resonates with British-Sri Lankan rapper MIA and she draws unabashed inspiration from the New York-bred Dominican-Trinidadian rap queen Cardi B. Miss Colombia has the effect of expanding the narrative about her dual Colombian/Canadian identity to her family’s mixed roots in the Afro-Colombian and Indigenous Wayuu communities, while establishing an ambitious new sonic palette that brings her closer to home.

Who or what exactly is Miss Colombia? Pimienta’s new album’s title was inspired by Miss Universe MC Steve Harvey’s gaffe in 2015 when he mistakenly awarded the crown to Miss Colombia instead of the actual winner, Miss Philippines. The incident not only caused her to reflect on the anti-blackness she experienced as a child growing up in Barranquilla, but the fact that while her sister was groomed to be a beauty queen, she suffered through an awkward adolescence as the “weird artistic tomboy” of the family.

“So I was like am I still Colombian or should I just keep calm and carry on because I’m Canadian now?” she said. “That was the premise and genesis of Miss Colombia.”

The central mood of Miss Colombia coalesces around a series of moving, musical poems embracing how she’s loved and lost. The journey magically documents an introspection tinged with sadness, yet still evoking a kind of optimism about experiencing the emotion in glorious repetition. “Te Quería,” (I Wanted You) pulses with a kind of samba-like cumbia, floating in the memory of desire and denial. The narrator’s “want” is quickly dismissed by quoting 2018’s Latin trap hit “Te Boté” (I discarded you).

As Pimienta more firmly grounded herself in her return to the Caribbean coast of Colombia, where Miss Colombia was recorded “live” in rustic settings, her approach evolved from the opulent electronic crafting of La Papessa to something even more sensual and spiritual. The change in scenery helped her closer to her goal of re-contextualizing her music. “It’s very easy to control electronic music,” she recalled. “What’s hard about electronic music is to make it sound emotional, make it sound beautiful.”

The emblematic track “Eso Que Tu Haces,” flows with an ethereal mysticism that fuses Lido’s love for traditional porro and slow-building cumbia. Its unique orchestral swirl of wind instruments and synthetic sounds quickly sets the tone for Miss Colombia. On “Nada,” she teams up with Bomba Estereo’s Li Samuet, venturing further with her transcendent soprano, crafted with precision and clarity, and driven by sharp-edged metallic beats.

Lido clearly remembers the moment when she began her journey as a transnational, cultural mixing experiment as a singer. The brashly dynamic electro-cumbia diva had gone through several phases, starting in her early teens fronting punk and metal bands, and had become obsessed with trip-hop pioneers Massive Attack and Tricky.

“It was before I moved to Canada, I was in this dance group called Cumbé in Colombia,” she recalled. “My cousin was one of the drummers in the group and he told me, ‘you know you have a really good voice, why would you waste that voice on this depressing music?”

Pimienta’s cousin then introduced her to an Afro-Colombian group called Sexteto Tabala, who she later collaborated with on the song “Quiero Que Me Salves” (I Want You To Save Me). Initially formed in 1996, Sexteto Tabalá are the cultural heartbeat of Palenque and guardians of Afro-Latin musical history who can swing like a salsa band, groove like a fuji orchestra and serenade you all at the same time. They are one of the most representative musical expressions of the African communities in Colombia.

Pimienta credits her time in Sexteto with the development of her singing and overall aesthetic. “That’s what shaped me, how I learned to have stage control,” she said. “It wasn’t because of some bar in Ontario; it was because I was in front of thousands of people singing Afro-Colombian spiritual music.”

That’s what makes the flow of Miss Colombia so riveting and rewarding. Structurally it’s bookended by two versions of “Para Transcribir,” one listed as “Sol,” (Sun) and the other “Luna” (Moon), a song that tries to come to grips with Pimienta--who is fully bilingual--as a perpetual translator of cultures. The edgy playfulness of her love songs gives way to tracks like “Quiero Que Me Salves,” “Pelo Cucu,” which celebrates the symbolic African texture of her hair, and “Resisto y Ya,” which makes pointed reference to recent massive Colombian protests against the current government.

With the latter track, Lido wants to make it clear that while she shares the popular disdain for a “politics of division” that squeezes Colombians, she insists that just by being who she is, an Afro-Indigenous, queer feminist, and Canadian outsider, she has always been engaged in resistance. The setting of the recording with Sexteto Tabala in San Basilio de Palenque, a historic town settled by escaped slaves in the 17th century, allows for an expression of healing through traditional culture. “The chance has arrived/To fix our past,” she sings hauntingly in the chorus of “Quiero Que Me Salves.”

“Sometimes I feel like Miss Colombia is me really doing it for real,” mused Lido. “Like I feel everything up until this point has been happy accident or a horrible accident. This album has been a beautiful process. It’s a really good representation of where I am now and where I’m ready to go next.”