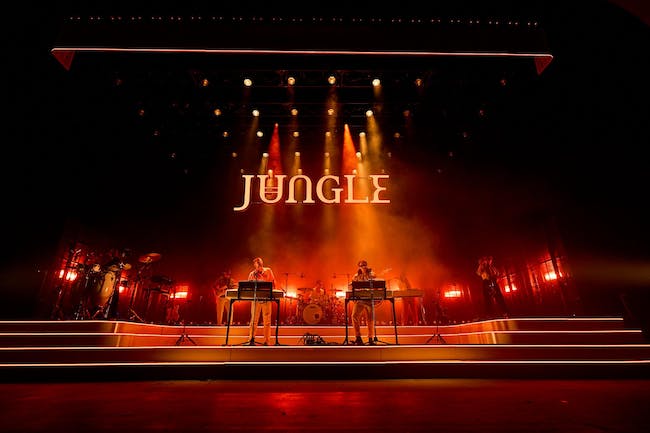 Jungle return in 2021 with their new album ‘Loving In Stereo’ which is likely to become the soundtrack for a summer quite unlike any other. The British producer duo have spent the last year locked in a studio and have emerged, delivering a huge soulful disco record for the post-social distancing age, with a life-affirming, dancefloor-igniting, sun-kissed celebration of all the things that make music irresistibly joyful. With huge sing-a-long hooks, enormous synths, and the pulse-raising rush of pushing the BPM through the ceiling, ‘Loving In Stereo’ is a record that dovetails with the release of UK’s lockdown, giving the listener one long hit of pure euphoria.

Less than a decade ago, Josh Lloyd and Tom McFarland were two friends with what felt like the impossible dream of one day seeing their name above the door of their local venue, Shepherd’s Bush Empire.

That was an ambition that they achieved when touring in support of their 2014 self-titled debut album. They went on to sell out London’s 10,000 capacity Alexandra Palace and the Hollywood Palladium some 9,000 kilometres from home. They’ve performed on five different continents, headlining as far afield as Sydney and Moscow, while also winning new fans at festivals such as Coachella, Bonnaroo and Lollapalooza.

Jungle’s international following embraced their albums too. Their Mercury Prize-nominated, Gold-certified debut and 2018’s follow-up ‘For Ever’ both entered the UK Top 10. Those two records have since amassed 750,000 equivalent album sales and close to a billion streams.

As ‘Loving In Stereo’ is an album that embodies what’s sure to be a heady summer of social liberation, it’s fitting that Jungle are experiencing something similar. They’re embracing the new-found freedom of launching their own label for the first time, a decision which has initiated their rebirth. They’ve ditched the external influences, put commercial considerations on the backburner and ignored second guessing what people expect from them. Instead, they’ve taken their music back to their roots, to a time when they could make whatever music they liked without overthinking it.

“With this record we’ve learned to trust our instincts and go with our gut,” says T. “We want it to be more raw, open, fun, enjoyable and entertaining, because that’s what music is,” adds J.

Some things, however, are already perfect as they are. J and T are world builders, a creative duo at the helm of an art project. The duo are the beating heart of the wider Jungle experience in which music, aesthetics and choreography co-exist as one distinctive artistic vision. Sharing the ethos of Gorillaz or The Avalanches, the pair are Jungle’s producers, songwriters and musicians, but they’re also its directors, content creators and curators. They’re at the helm of a wider community of creatives.

If you chance upon ‘Busy Earnin’’ or ‘Casio’ on the radio, it’s impossible not to think of the striking, stylised choreography of their videos. As T states, it’s a 360 experience in which their music influences their visuals, which in turn lends fresh impetus to the music. “Dance is the most instinctive way for humans to react to music,” he evaluates. “Sometimes when I watch our videos, I learn new things about the music because of the way the dancer is expressing themselves. That’s the most powerful thing for me about what we do visually.”

That approach will inform their already vibrant live show, which will create the feeling of stepping into a Jungle video shoot by amplifying the focus on their choreography and visual aesthetic. Their musicality – emphasising electrifying live instrumentation over sample and loops – empowers a collective feeling of togetherness, which is just at home on the sweaty sway of a dancefloor as it is providing the euphoria as the sun sets on summer festivals. And that can only be elevated by the exuberant energy of ‘Loving In Stereo’.

Jungle achieved that atmosphere by extending an open invitation for friends to join them at sessions at The Church, Paul Epworth’s studio in north London. In contrast to the focused writing camps that have become an industry norm, if you turned up, you might well end up on the record. That’s how the timeless vocal hook on the nostalgic yet postmodern ‘All The Time’ was created. J describes it as feeling “like a garage tune, but played by musicians with knowledge of future rhythms.”

That carefree approach also resulted in Jungle’s first two feature collaborations. They struck up a friendship with rapper Bas when they shared a bill at the Greatest Day Ever festival on Coney Island, and several months later he joined those free-spirited sessions at The Church, where the charismatic, old school hip-hop track ‘Romeo’ emerged. Meanwhile, at the end of a session with rising star Priya Ragu, J suggested they race through one final idea. The result, ‘Goodbye My Love’, captures Priya’s voice in a new way: jazzy, loungey and tinged with psychedelia.

‘Loving In Stereo’ immediately sets out its stall with the lead single ‘Keep Moving’. At its core it’s disco, but it feels free and effortless. It’s neither beholden to the genre’s past or striving to redefine it. Its lyrics reflect the changing circumstances the pair found themselves in while also being attenuated to these trying times. As T summarises, “Whatever you go through, as long as you can stay strong and fight it, there’s always something on the other side.”

One of three songs written with their old friend Inflo (a Mercury Prize and Ivor Novello winner for his work with Michael Kiwanuka and Little Simz), ‘Talk About It’ offers a lighter but similarly luminous vibe: ecstatic, spontaneous and with a propulsive dub-flavoured bassline. And at the other extreme, there’s ‘Truth’ which sounds a world apart from anything Jungle have released before: a driving Motorik rhythm with a punk-infused energy and uplifting harmonies.

The album’s themes exude hope: new beginnings, new love, fighting back against the odds. They reflect the strong position Jungle are in now – not only professionally, but with both of them relishing the endless possibilities that come with blossoming relationships. “When you find true love, most of your other problems dissolve,” smiles J. “It’s the only real purpose for living.”

That extends to the duo’s connection as Jungle. The shared experiences, the unspoken bonds, the feeling that whatever they achieve can’t match the purity of hanging out with your best friend. It’s yet another vital element that makes ‘Loving In Stereo’ the experience that it is.

“When we write music there’s hope,” continues J. “Maybe today we’ll create something that influences people and changes the way they feel. If you can make something that lifts people, that’s an amazing feeling.”

So sit back, hit play and listen to ‘Loving In Stereo’ explode into life. 45 minutes later, the world will already feel like a better place. The soundtrack to a new summer of love? You better believe it.

Blu DeTiger is a multi-instrumentalist, singer, songwriter, producer, DJ, performer, and bass virtuoso born and raised in New York City. She's been playing the bass guitar since 7 years old. By the age of 17, she was a staple in the NYC club, fashion, and creatives scenes -- DJing sets while still underage, walked in the Kid Super NYFW show, and more. In 2020, she released "Figure It Out" which went viral in 31 countries, charted on AAA radio, and made NPR's top 40 songs of the year list.

Blu continues to soar to new heights with over 1M TikTok followers and popularity amongst fans and critics alike, from Flea, Janet Jackson, Questlove, Timbaland, etc. to Variety, V Mag, Billboard, Forbes, NPR, MTV, Interview, Rolling Stone, and so many more. She's an accomplished session and touring musician who's played with Caroline Polachek, Fletcher, and others. Additionally Blu has been named to Fender's Up Next 2021 Global Artist Series.

Blu's debut EP How Did We Get Here? is out now. Her single "Vintage" received a Beats 1 Zane Lowe premiere and Jack Saunders Radio 1 spins out the gate, covers at Apple Music's Superbloom and New Music Daily playlists, and Spotify Lorem's playlists. Since release the EP has accumulated more than 45M streams online which further shows why she is an emerging force of nature.