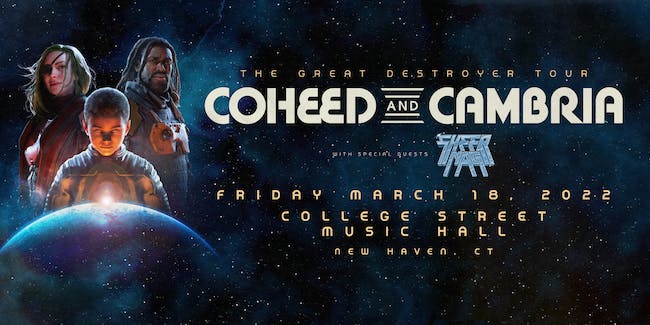 By purchasing tickets to this event, you agree to abide by the State of CT, City of New Haven, Artist, and College Street Music Hall's Health and Safety measures in effect at the time of the event, which may include, but not be limited to, providing proof of COVID-19 vaccination status for patrons ages five (5) and older and/or providing proof of negative COVID-19 test within 72 hours of event time. 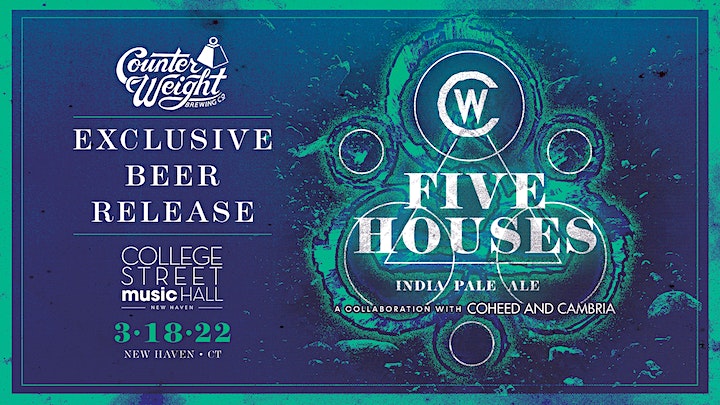 “The Color Before the Sun, the eighth studio album from progressive post-hardcore visionaries Coheed and Cambria, finally sends this band of space cadets crashing down to Earth. After traversing the outer limits of science fiction over seven acclaimed albums and more than 20 comic books, founder and songwriter Claudio Sanchez is ready to explore his emotions nakedly, plainly and unabashedly. No conceptual framework, no galaxy of characters, no seven-minute epics, no places for the band, as he quips, to “put a laser beam on it.”

“I kind of want people to know that Coheed can write that sort of record,” says Sanchez. “I’ve always said in the past that there’s never been a limitation on the band. It makes no sense to me to draw a line in the sand and never cross it.”

While the most conceptually abstruse Coheed records have always had a foundation in reality, The Color Before the Sun marks the first time Sanchez is exposing his raw feelings, narrated from his own perspective — the anxiety of fatherhood, the disorienting feeling of losing a home, the reflections had during early-morning walks. His own story is told through big, bright, driving, colorful songs that beam like power-pop, crunch like vintage ’90s emocore and float with the expansive feel of space-rock.

“Again, it was that exposed honesty,” says Sanchez. “I wanted the blemishes to create the charm…. Let those accidents just happen, let’s not microscope it.”

The concise, 10-song Sun follows Coheed’s sprawling, two-part opus Afterman: Ascension and Afterman: Descension. Both Top 10 debuts, they serve as a “punctuation mark” to the seven-album Amory Wars saga that included 82 minutes of music and a hardcover coffee table book. Around the time of those records’ completion, Sanchez and his wife left their cozy, secluded home in New York’s Hudson Valley for a more nomadic life, attempting to find their place in the world. After travelling to California, Florida and Paris, they ultimately fell in love with Brooklyn, leaving their quiet home for a cramped brownstone in Park Slope. Used to working in solitude, Sanchez instead found himself writing music in the middle of a railroad apartment.

“Normally…I need to kind of get into my own head and create these characters,” says Sanchez. “So I felt very exposed. I knew that our neighbors could hear me. At one point somebody had asked if a woman was in the apartment singing, and I was like, ‘Aaaah!’ I think that subconsciously leaked into the music that I actually created. I kind of gathered this collection of songs that very much chronicled the situation I was feeling there. I didn’t understand who I was, what I wanted to be. I was writing these songs that weren’t part of a formula. It just felt foreign.”

During the process, he also discovered his wife was pregnant with his son, Atlas, and the anticipation of being a father started to influence his songwriting. The tender acoustic ballad “Ghost” has Sanchez pondering what type of parent he will be; the explosive, deceptively triumphant “Atlas” anticipates what life will be like leaving his first-born son when he goes on the road; “Here to Mars” is a simple, hard-chugging love song to his wife.

The destroyed home on the album cover is no metaphor. The tenants who had rented Sanchez’s house upstate had abandoned it, leaving some demolished floors, the residue of a colony of plants and the stench of marijuana. It’s speculated that the home where Coheed and Cambria created their last four records — writing upstairs and rehearsing in the basement — was totaled after the residents turned it into a grow-house. Songs on Sun deal with the transient feeling of Sanchez not knowing whether to stay on the “island” of a Brooklyn block, or in the comforting country confines of his home, whether destroyed (“Colors”) or intact (“Island”).

Though never leaving our own solar system, The Color Before the Sun, may be Coheed and Cambria’s most important saga — a story that’s sketched less like an explosive Image Comics title and more like an introverted Drawn and Quarterly book, less like Todd McFarlane and more like Adrian Tomine.

“That’s always sort of been the reason for the concept, was that it was a curtain to hide behind,” says Sanchez. “I always found it very hard to be that heart-on-your-sleeve songwriter. Maybe it’s the fear of judgment or whatever. I felt like if I could just hide behind these fictitious characters, then nobody will judge me. They’ll judge the work, but it won’t stain me. It’s almost like trying to distance myself from the art, whereas this time I’ve sort of embraced it and allowed it to be me.”

Sheer Mag’s dizzying rise initiated in 2014, when the Philadelphia band self-released the first of three 7-inches and started playing the Northeastern DIY circuit. Ironically, the music stood apart because it sounded so familiar. Indebted to ‘70s arena rock, power-pop, and proto-metal, Sheer Mag’s songs reminded a lot of us of the music we grew up with, but maybe couldn’t relate to because it was big, brash, and unapologetically macho. Sheer Mag reclaimed some of that energy without perpetuating the toxicity. On their debut album, Need to Feel Your Love (2017), the band surveyed their contemporary political landscape through the lens of history. Singer Tina Halladay transported herself back to the 1969 Stonewall Riots, denounced redlining practices that undermine the popular vote, and paid homage to White Rose activist Sophie Scholl. On paper, it’s a mouthful, but accompanied by guitarist/lyricist Matt Palmer, guitarist Kyle Seely, and bassist/producer Hart Seely, those songs became hook-laden rallying cries.

Two years later, Sheer Mag have returned with their sophomore album A Distant Call. They’re still writing about surviving our current hellscape, but this time around, the politics get extra-personal. The album verges on being a concept piece, and the protagonist resembles Halladay herself. The songs document a particularly alienating time in her life when she was laid off from a job. Broke and newly single, her father (with whom she had a fraught relationship) passed away, leaving her with more wounds than felt possible to heal.

“We’ve been waiting to write these songs since we started the band and we were able to take these experiences and build a story out of them,” Halladay says. Palmer adds: “We don’t want people to be bogged down by pretension or theory. You don’t need to have read Das Kapital to know that capitalism is terrible. A Distant Call makes an argument for socialism on an anecdotal level. We’re talking about how late capitalism alienates and commodifies whatever is in its path without using the term ‘late capitalism.’” Palmer and Halladay’s new approach to lyricism extended to the recording process, too. Once the Seely brothers had laid down the tracks, Halladay recorded vocals with producer Arthur Rizk (Power Trip, Code Orange) as opposed to on an 8-track, which was the band’s preferred method on previous releases.

A Distant Call opens with Halladay’s measured scream before “Steel Sharpens Steel” kicks in. It’s a prologue that foreshadows our protagonist’s journey from feeling down-and-out and destitute to self-actualization. “It’s a chain reaction/ When you turn the other cheek/ Remember if you’re looking for action/ And you’re feeling dull and weak,” Halladay snarls on the chorus, channeling Judas Priest over the boot-stomping rhythm section. The story really gets started on “Blood from a Stone,” when we learn that our protagonist’s SNAP application was declined, and she’s “living check-to-check.” It’s heavy power-pop so sleek it gleams. “We had some more soul and dance songs on the last record and we’ll probably return to that at some point,” Palmer says. “But on this record we wanted to focus on making straight-up rock music.”

That isn’t to say that A Distant Call doesn’t draw from a wide-range of influences within rock. The twinkling lap steel guitar on “Silver Line” sounds-off to Fleetwood Mac, showcasing a softer side to Sheer Mag. The lyrics find our protagonist in a desperate state, self-medicating with alcohol. When she recognizes her own predicament in the headlines, though, her depression eases off momentarily. “Well there’s a picket line down in West Virginia/ The bosses caved but wildcats continue/ Today my job said to not come back/ So now I’m striking for nothing with no contract,” Halladay sings. In the next song, the jangling “Hardly to Blame,” our protagonist is dumped by her partner. Heartbroken, she wanders the streets of Philadelphia, which has turned into “a puzzle” that she “can’t solve ‘cause it’s not true.” On “Cold Sword,” she snaps back to reality upon learning of her father’s death. Forced to reconcile with familial trauma, our protagonist asks: “How could I learn to love/ From somebody so abusive?” The question goes unanswered but the undeniably catchy chorus provides some form of catharsis.

“I tend to think of ‘Cold Sword’ as the fulcrum that the album pivots on. The protagonist recognizes that this is the only life she has, and in spite of the pain and suffering she experiences, she starts to want to make the most of it,” Palmer says. The bright melody of “Chopping Block” brings levity, as Halladay sings, “Between the parties there’s no light/ We need workers to unite/ We can decide to have another world/ But we’re gonna have to fight.” Our protagonist’s confidence blooms on “The Right Stuff” when she addresses anyone who might think her weight is concerning: “If you’re worried about my health/ Shut your mouth and keep it to yourself.” In recognizing that beauty standards are a capitalist ploy designed to keep women imprisoned, our protagonist starts down a road to self-acceptance, and maybe even love.

The conflicts our protagonist comes up against coalesce on “The Killer.” The system at-large has been the culprit all along, and she recognizes that rich politicians running the country have more control over her life than she does. They’re “shaking hands on the senate floor” and brandishing their hypocrisy like a weapon: “He’s got you right between the eyes/ Waving the flag for human rights.” It’s the penultimate track on the album, and it best exemplifies Sheer Mag’s growth from those nascent three EPs to now; the production is razor-sharp, and the gang vocal motifs are as playful as they are ferocious. There’s a glimmer of hope in the struggle, and Sheer Mag close the album with a message of resilience. “They wanna see us fall,” Hallday sings, “But I hear a distant call.” In the background, a faint whisper beckons from just outside the realm of possibility. “Keep on running,” it urges.