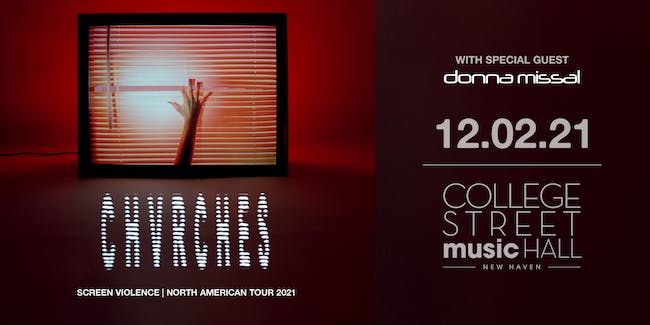 $1.00 per ticket sold will go towards Artist Charity.

CHVRCHES have announced their highly anticipated fourth studio album, Screen Violence, due out August 27th on Glassnote Records. The band has also shared the second single from the forthcoming record, titled “How Not To Drown,” featuring one of the trio’s ultimate heroes, Robert Smith. The Cure frontman’s signature voice melds perfectly with Mayberry’s, both supported by the dark, piano-driven song about trying to stay afloat during a time of fear and depression.

Recorded almost entirely remotely between Los Angeles and Glasgow, members Lauren Mayberry, Martin Doherty and Iain Cook self-produced and mixed the album via video calls and audio sharing programs to create something that is unique and special, but inherently CHVRCHES.

Screen Violence was originally conceived as a name for the band. A decade later, and during a pandemic when the reality of screen violence has never been more pertinent, struggling to make the people you love feel more than the characters on a TV show, and experiencing a world of trauma as if it were another, CHVRCHES revived the term for their forthcoming album title. Narrating the theme of screen violence in three main forms - on screen, by screens and through screens - the album touches on feelings of loneliness, disillusionment, fear, heartbreak and regret.

“I think for me it was helpful to go into the process with the idea that I could write something escapist almost,” Mayberry says of the album. “That felt freeing initially, to have concepts and stories to weave your own feelings and experiences through but in the end, all the lyrics were definitely still personal.” While Martin Doherty adds, “To me, the screen aspect was a bit more literal. When we were making the record, it was like half of our lives were lived through screens. What began as a concept was now a lifeline.”

The making of Screen Violence also marked a decade together for the band - a decade whose sound they have helped to create and define from their 2013 breakthrough The Bones of What You Believe and 2015’s Every Open Eye, to their most recent 2018’s Love is Dead.

“How Not To Drown” follows the release of “He Said She Said,” a song Vulture called "A predictably huge song...And the hook is a fitting moment of pandemic catharsis." The single is fast rising on the US Alternative charts, and debuted #1 on the NACC Singles Chart and went #3 on the Submodern Chart. The single is accompanied by an official video directed by multi-disciplinary artist Scott Kiernan.

"It's not about you or somebody new, this time it's about me!" hollers Donna Missal on "Hurt By You." The song is Missal at her most defiant, her most honest, her most gung-ho. It's a new slate for 2020 and for her career. But that line isn't just a slap back at an old ex, it's a cry for a place in the world that is all hers; a place where she can share her rawest emotions and her realest stories, even if they don't yet have an ending. Missal has chased stories since she was too young to read them, but she only realized in the past year that to let the script pour out from her own life would make for the story worth telling. It's been a painful, uncomfortable and uncertain experience to hunt for the tales she wanted to share, but now it's done Missal finally knows what kind of voice she is. Donna Missal is not a flash in the pan. Donna Missal is a rockstar. Donna Missal is a soul singer. Donna Missal has all the makings of a one-of-a-kind legacy artist. And yet Donna Missal still possesses the hunger of the underdog reaching for her day in the sun.

On Christmas Eve, Missal is found in a huge house she shares with her siblings on a residential street in LA's suburbia. She's alone with her many cats and cuts a small figure, curled up in a corner. Her warm presence, unfiltered voice, and flowing conversation could fill an arena. Missal is a people person. She's a sibling to one brother and four sisters and has experienced so much life as part of a pack. But it's the moments she has in solitude that she relishes. There wasn't a lot of space to be alone growing up in New Jersey. The Missals were home-schooled.

They were each other's best friends and collaborators. There was a sixth child too: music. Considering the Missal family's lineage (her grandmother was a songwriter in the 1950s and her father was an '80s musician), music wasn't something Missal discovered. It was just there -- a part of the furniture (literally the house was filled with equipment and instruments). Music was a sixth sense, a language they spoke in. And it was never just Donna's thing.

Missal came to LA after her song "Keep Lying" -- one she wrote with the idea someone else would sing it -- went viral. She was newly signed to a record label, working on a full-length LP (This Time, Harvest Records). She was about to go on her debut headline solo tour. It was a lot of firsts -- a lot of searching for her corner to curl up in. Only recently has she come to understand that to try and fit in somewhere, to attempt to pander to trend is a race to the bottom. Real connection doesn't come from reaching for universal themes but from writing about the deeply personal. For the longest time, Missal ignored that notion. All the while her personal life was suffering at the hands of her burgeoning career. So with the intention of creating a follow-up album, Missal tore up her own rulebook. She wanted to be as disconnected from whatever zeitgeist in order to be as closely connected to the beating of her own heart.

She stayed in LA. She found songwriters and producers she trusted to be vulnerable in front of. She fought through the discomfort.

"I did it on purpose," she says of her choice to ignore the context of whatever is currently popular. "I've spent so much time making music concerned about whether it would be important to people at that given time." It was a scary decision and one in which Missal had to put years of criticism, ageism and imposter syndrome to bed. Even more so than the tropes of the industry, Missal had to silence her own inner critic. Self-opposition is a bitch, and for Missal there was a prior tendency to get in her own way. While she's no longer concerned with being flavor of the month, Missal gets to invest way more time in something that will last. "I think about the concept of being aspirational with this music," she says. "Fuck where I am. Fuck what's actually possible. Where do I want to be? Make things that adhere to the environments you want to be in. Not the environment you're in right now. If you want to play to thousands of people, and you want to see your dream realized in a big way then you have to own it. Sound big. Be big."

There's this element of theatrics and performance to what she does that she's so far hidden from the music she writes. "I'm trying to marry the two," she says. "I'm just not thinking: is this cool? Are the kids gonna like this?" she laughs. "As soon as I stopped worrying about that it became so much easier to write things that I believe in and was comfortable standing behind." She also stopped trying to hide from her own story. She stopped trying to be the songwriter for hire, the storyteller. "Now I'm just sort of saying things," she says. Often, she entered the studio not knowing what to say. It was a blank slate every day as she tuned into herself and to peers from the past. She studied '90s classics: Sheryl Crow, Shania Twain, Smashing Pumpkins, Pixies, My Blood Valentine. "Real shit!" she says. She listened to maverick album artists who have stood the test of time regardless of whether they were fitting some mold in their own era. It swirled around with her own musings and created this body of work that feels like the stuff Missal's been reaching to for years.

The results is a body of work that spans all the different definitions of what it means to be timeless. A song like "Hurt By You" would easily sit on a War On Drugs record, "How Does It Feel" is a slice of luscious shoegaze, "Who Loves You" is from the notebook of a country balladeer, and "Carefully" could be a sad Rihanna piano song. Missal decided long before a lot of these songs came to be that the album title would be Lighter. "It represents the concept of burning shit down all around you and rising from the ashes." There's something in Missal's freedom and autonomy, however, that also feels less weighed down. Ironically through writing about the process of heartbreak and destruction she's now more firmly in the driving seat than ever. This has been a far more definitive artistic time for her. Where her debut LP captured little moments, Lighter is the big picture. It's a real exposed introduction to Missal that listeners don't yet know they've been waiting for. It's an album about fragility, self-acceptance and self-discovery. And it completely burst itself out of her.

"Being uncomfortable and in the process of figuring this out, hoping to get to the other side is something to talk about," she concludes. "You don't have to only talk about how you got there. Be in it." It's the scariest work she has ever done but for that reason it will be the most rewarding. "I'm not afraid to finally say that I want to go big. Fuck it," she says. And with that Donna Missal has arrived.