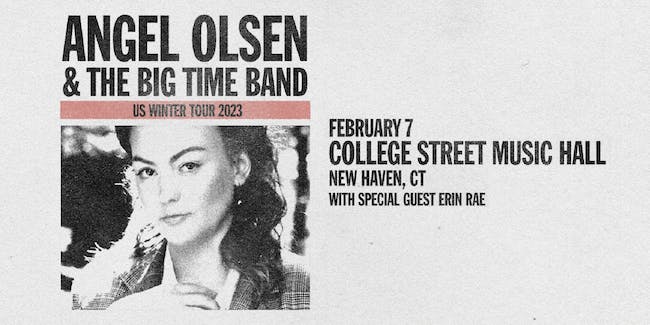 Fresh grief, like fresh love, has a way of sharpening our vision and bringing on painful clarifications. No matter how temporary we know these states to be, the vulnerability and transformation they demand can overpower the strongest among us.

Then there are the rare, fertile moments when both occur, when mourning and limerence heighten, complicate and explain each other; the songs that comprise Angel Olsen's Big Time were forged in such a whiplash.

"I can't say that I'm sorry / when I don't feel so wrong anymore," the record begins, her voice softer and more open than ever, as if she's singing through a hard won smile. "All the Good Times", a twangy banger with nods to JJ Cale, starts the album on a triumphant and bright note. The title song, "Big Time", follows and continues the warm optimism. "Guess I had to be losin' to get here on time," she sings, a fearless love song co-written with her partner.

Big Time is an album about the expansive power of new love, but this brightness and optimism is tempered by a profound and layered sense of loss. During Olsen's process of coming to terms with her queerness and confronting the traumas that had been keeping her from fully accepting herself, she felt it was time to come out to her parents, a hurdle she'd been avoiding for some time.

"Some experiences just make you feel as though you're five years old, no matter how wise or adul... t you think you are," she writes of that time. After that tearful but relieving conversation, she celebrated with her partner, their friends, oysters, and wine. "Finally, at the ripe age of 34, I was free to be me."

Three days later, her father died; his funeral became the occasion for Olsen to introduce her partner to her family. Though she was fearful their presence as a newly out queer couple would be "an additional symbol of loss," those days went peacefully, yet only two weeks later Olsen got the call that her mother was in the ER. Hospice came soon after, and a second funeral came quickly on the heels of the first. Another trip back to St. Louis, another grief to face, another deepening and intensification of this still-new love.

The shards of this grief-the shortening of her chance to finally be seen more fully by her parents-are scattered throughout the album. "It's a hard time again," she sings on "This is How It Works", pushing against the irrevocability of death, "Tell me a story that will make me forget." "Go Home", which begins with an almost numbed calm, slowly builds up to a wailing that comes up straight from the ground: "I want to go home, go back to small things. I don't belong here. Nobody knows me."

"You can't plan grief, you can't organize it or schedule it or know how you'll feel when it comes. It just happens, and when it does sometimes it's not what you thought it would be." Three weeks after her mother's funeral she was on a plane to Los Angeles to spend a month in Topanga Canyon, recording this incredibly wise and tender new album.

Loss has long been a subject of Olsen's elegiac songs, but few can write elegies with quite the reckless energy as she. If that bursting-at-the-seams, running downhill energy has come to seem intractable to her work, this album proves Olsen is now writing from a more rooted place of clarity. She's working with an elastic, expansive mastery of her voice-both sonically and artistically. These are songs not just about transformational mourning, but of finding freedom and joy in the privations as they come.

Playful bits of Tammy Wynette and Kitty Wells are here, too, but so are the complex orchestrations of her genre-bending 2019 record, All Mirrors. While that record was full of dramatic shifts and twists, here the surprises come in their simplicity-a slow swell of strings, instrumentation that cycles like a storm, or sparkling horns in a light-flooded break-up ballad.

While the spritely nature of her last EP, Aisles, may have signaled Olsen's turn deeper into the electronic direction of her last All Mirrors, there's hardly a synth in sight here. Jonathan Wilson, served as co-producer and also mixed the tracks, while Drew Erickson played piano, organ, and scored the string arrangements. Emily Elhaj, Olsen's longtime bandmate, was a consistent collaborator as well, on the bass throughout. The album was recorded and mixed at Wilson's Fivestar Studios.

"And I can't fit into the past that you're used to, I refuse to," she sings as a wraithlike piano scaffolds her hopeful voice on "Ghost On". "Forget the old dreams," she rejoices on "Go Home", "I got a new thing." Darkness inherently suggests depth, but it takes a much wiser writer to find meaning and complexity in the luminous place that Big Time occupies. "Chasing the Sun" ends the record in a smiling, romantic place, a verdant crescendo rising as she pines: "Write a postcard to you / when you're in the other room/ I'm just writing to say that I can't find my clothes / If you're lookin for something to do."

The burning of her earliest work is still here, of course, but this time she's "freed from the longing / for one moment to last" and she's ready to "walk through the fires / of all earthly desires."

Three years after the release of her critically acclaimed debut, Putting On Airs, Nashville-raised singer-songwriter Erin Rae shares an intimate, honest, and playful version of herself through her sophomore album Lighten Up. Produced by Jonathan Wilson, and recorded in the musically hallowed grounds of California’s Topanga Canyon, the album represents a sonic and inner shift for Rae. In it, she embraces more of her influences, like baroque-pop, cosmic country, and indie-folk songs while mirroring a more compassionate self-view she calls “accepting my humanness”.

Although she grew up in a musically oriented family, Rae’s pursuit of music happened by accident. After being gifted a Martin acoustic guitar on her 18th birthday, Rae decided to drop out of college after just one semester. Her goal at the time had little to do with making music into a career, and everything to do with spending more time and energy with the community of musicians and writers she knew back home. Looking back on those days, she recalls the initial high of playing live at an open mic during winter break and realizing, “this is how I connect with people. I have to pursue this.”

Rae has continued to connect with people through her music ever since, performing at mainstays like Newport Folk Festival, Red Rocks Amphitheater, and sharing stages with Father John Misty, Hiss Golden Messenger, Jenny Lewis, Jason Isbell, and Iron & Wine. The success of Putting On Airs also earned her a nomination for Emerging Act of The Year at the 2019 Americana Music Awards alongside other trailblazing artists like Yola, Jade Bird, and J.S. Ondara. When the Covid-19 pandemic called a halt to touring, Rae took advantage of the opportunity to revel in a wide range of musical influences she had absorbed since the making of Putting On Airs, sitting in an un-rushed space while deciding which direction she wanted to take her music next.

Though Rae says the core of her work will always stem from the songwriting she was raised on, the making of Putting On Airs with collaborators Jerry Bernhardt, Dan Knobler, and Dominic Billett inspired her to deepen her music exploration outside the traditional Americana box and listen to records in a broader way. “It opened up a sonic world to me that I had always enjoyed, but that felt mysterious. The process of making my last record allowed me to visualize how recorded sounds come to be, so returning to recordings of beloved artists like Feist, Judee Sill, Wilco, became exciting all over again. I could suddenly imagine what was happening in the room to create what I was hearing on the recording.” This newfound excitement led Rae down many rabbit holes, particularly a deep-dive into English psych-folk artists like Kevin Ayers and Pete Dello And Friends, as well as songwriters like Gene Clark, Scott Walker, and Jesse Winchester.

That expansive discovery of musicality led her to connect with Wilson, known for his work with artists like Father John Misty, Jenny O., and Roger Waters. Their shared love for the cinematic pop of the Walker Brothers, Bobbie Gentry, and the folk stylings of Margo Guryan created a solid foundation to create together, so Rae flew to Wilson's Five Star Studios in February 2021. Wilson called on musicians Jake Blanton (Bedouine, The Killers) and Drew Erickson (Weyesblood, Father John Misty) to contribute bass, keys, and string arrangements, and played drums and lead guitars himself. Erin invited friends Kevin Morby and Meg Duffy of Hand Habits to contribute, and Wilson's longtime friend Ny Oh to sing some of the background vocals. The result is a fresh, authentic, and singular collection of recordings that are clearly rooted in a classic "canyon" sound.

Lighten Up also showcases a new level of personal growth for Rae, and invites listeners to share in the results of her work towards self-acceptance. “My last record was a lot of self-assessment and criticism, and trying to kick old habits and ways of relating to people,” Rae acknowledges. “This one is about blossoming, opening up, and living a little more in the present moment. Accepting what it is to be human.”

In the lead single, “Modern Woman” Rae celebrates womanhood and femininity in all of its forms, countering outdated beliefs over driving drums and rocking guitars and inviting an inclusive perspective through her cheeky lyrics “come see a modern woman.” With “Lighten Up and Try” a song that embodies the album’s title, as well as its ethos, Rae dwells on the process of opening up to love and to life, and the vulnerability that comes with that process. Expounding on the song’s meaning, Rae shares, “This song for me just feels like celebrating the vulnerability of living. Saying yeah, ‘No one really knows what they’re doing. You just have to try.’”

In the measured track, “Mind - Heart” Rae outlines the dangers of codependency, and through the straightforward lyrics, “the mind is fucked but the heart is pure,” she meditates on the unreliability of thoughts. “Both of my parents have practiced meditation throughout my life following different traditions. This song for me is essentially using mindfulness to detach from habitual patterns of thought and behavior, and reconnecting to the heart, the intuition.” In “True Love’s Face” she opens to the potential of love and the choice to not flee from it over retro melodies, affirming through her bell-like vocals, “I will know it when I see it / I will not turn it away.” And in the psychedelic “Candy + Curry” Rae balances awakening and being centered in the present moment, with a soundscape that invites the listener to relax and enjoy the ride.

With Lighten Up, Rae hopes to give listeners the opportunity to borrow what she’s learned, that there can be a lightness when things feel heavy and that even our darkest corners can allow us to shine. “I hope this record encourages people to be a little softer towards themselves.” Rae shares. “If [Lighten Up] gives people listening the space to feel more tender towards themselves and move in the world from that place, that would be the dream for me.”